A Saint for Old Age

Saint Jeanne Jugan is the foundress and the first Little Sister of the Poor.

She understood hardships. Born to a poor family during the time of the French revolution ... these were dangerous times for both the rich nobility and for Christians.

But her pious family had her baptised on the day of her birth on October 25th, 1792.

Not quite four years old, she lost her father to the sea. Her mother had to raise the family alone. Life was hard but bearable. People in their village helped each other in whatever way they could. 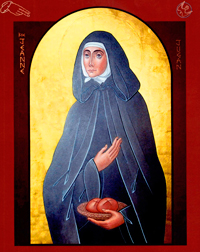 Work for food that will last

In her teens, Jeanne goes to work as a kitchen help. She earns her living but also works to deepen her spiritual life.

By her early 20s, she is sure that

Convinced, she turns down not once but twice, the marriage proposal from a young sailor.

She moves away from her family home and works for many more years, first as a nurse’s aide and then as a maid …

In the winter of 1839, Jeanne carries to her home, a blind infirm elderly woman, Anne Chauvin. She puts Anne in her own bed. Jeanne by now is 47.

Jeanne does not stop. She brings home a second elderly woman and a third and a fourth …

Several young women are attracted to her lifestyle and work. They join her.

A religious family takes shape ... all drawn to the Lord in the face of the elderly poor.

The work takes wing and spreads across France and beyond its shores.

The people in the French town of Nantes observe that the Sisters are like “the Little Sisters” of the Poor.

Jeanne Jugan becomes Sister Mary of the Cross … She would say:

We are grafted into the cross and we must carry it joyfully unto death.

Grafted into the cross

Can anyone truly carry his or her cross with joy? Jesus did and so did Jeanne, His beloved.

Her work or rather God’s work, as she would say, spread. It was almost an open secret that Jeanne had the inspiration and was the foundress.

But Jeanne is set aside and she ‘stays aside’!

The spiritual director of the young community lets ambition get the better of him.

Jeanne is sent out to do the ‘hard work’ … she goes out begging on behalf of the poor.

Soon even that is taken away from her and she goes into retirement at the Motherhouse.

Fruitful as a grain of wheat falling into the earth

“God writes straight with crooked lines”, it’s said. It’s the best thing after all. Jeanne lives among the novices.

She shares her life, her counsels and her ideals of the mission to “the Poor who are Our Lord”, with those who are the “future of the Congregation

When she dies in 1879, she is known as ‘the third Little Sister’ … But God in His time will shed light on the truth. 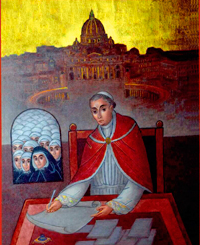 God could glorify no more humble a servant than she.